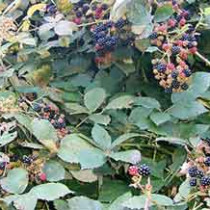 It’s amazing the extent we will go to just to cover our tracks.

Reference: v.7 For Herod himself had given orders to have John arrested, and he had him bound and put in prison. He did this because of Herodias, his brother Philip’s wife, whom he had married. (TNIV Bible)

Explore: I wasn’t a bad kid, but I do remember telling one significant lie.

It all started on a sunny afternoon. I was meeting a friend down at the local pool and, as I lived in a small country town, I walked down the street on my own.

I thought I could be super clever and walk with a towel over my head (don’t ask!). Not surprisingly, I was not as clever as I thought and ended up walking into someone’s garden and right through some rose bushes.

They cut my legs fairly badly, but as I was embarrassed by my blunder, I kept heading towards the pool, hobbling all the way. As I hopped into the entrance of the pool I remembered someone saying there were rogue blackberry bushes near the footpath at the pool, so I decided there and then that was how I would explain my scratched legs.

Sure enough, I could not go far into the pool before someone noticed my bloody legs and asked me what happened. The blackberry lie came out and it was the story I stuck to.

Even when a friend said that she’d seen me hopping along the footpath before the blackberry bushes, I was willing to make her look the liar just so my story was more believable.

Even when the owner of the pool came to my home later on that day to check up on me – no doubt fearing a lawsuit! – I vaguely described to her where the blackberry bushes were.

Even when my mother wanted to take a thorn out of my leg I refused to let her help me in case she saw that the thorn was not a blackberry thorn but really a rose prickle.

I covered myself for years about my blackberry lie just so people would not think I was silly for walking along with a towel on my head!!

Application: It’s amazing the extent we will go to just to cover our tracks. Even Herod, a king and leader of a country, worked hard to cover his tracks.  He respected and liked John the Baptist, however, had him killed so that he would not lose face before his friends and family.

My blackberry lie did not lead me to murder, however, it showed me how insidious a lie can be. Once you set a lie in place it is often followed by a great many others in its path.

If I had have just owned up at the beginning I would have looked a little silly, but saved a lot of worry for myself as well as others. The truth can sometimes be challenging to reveal, but it is the best way to live.

Prayer: Lord, forgive me when I do wrong, just so that others will think I am a better person. May we live with integrity and honesty so we are good examples for You. Amen.

What lie have you been willing to tell?

This is one of my favourite stories from your Childhood.