A Bit of Small Change 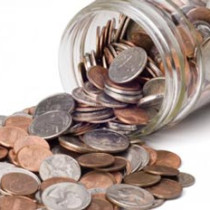 That annoying habit your partner has, that doesn’t seem to worry you to begin with, suddenly is the basis for 90% of your arguments at home!

Reference: v.3 If you, Lord, kept a record of sins, Lord, who could stand? (TNIV Bible)

Explore: I clearly remember when I met my first sponsor child in the Philippines. He was incredibly shy to be in the presence of this big, white woman, but he slowly warmed to me and in the end gave me an awesome hug goodbye.

After meeting him and seeing his situation I was inspired to do more than just my monthly donations. Every time I got some spare change I would place it in a money jar on my bedside table.

Every week I would empty my wallet of coins and add them to the special jar. While I never really noticed the impact on my finances, it was amazing how many coins I collected.

A year later I headed back to the Philippines and counted up the coins I had collected. There was nearly $1000 that had been collected over the year.

Although I only added a small amount to my money jar each week, it grew quickly and became quite substantial by the end of the year.

Application: It’s amazing how quickly small things can build up. While it’s a nice surprise when small amounts of money build up into something good, often the little negative things in our lives can build up too.

That annoying habit your partner has, that doesn’t seem to worry you to begin with, suddenly is the basis for 90% of your arguments at home! That small rubbing on your heel that your shoes are creating, you’re able to push to the back of your mind until you’ve worn them all day and you’d now rather cut off your feet than put those shoes on again!

The same thing happens with sin. Most of the time, we do not choose to commit a huge mistake. What happens is that we start doing something wrong that only seems small, but soon grows into something quite ugly.

We all have some little mistakes and some ugly wrongs in our lives. We are fortunate that God does not keep a record of all these things. He loves us so much that He forgives as well as forgets our sin.

This is not just for the sole purpose of us feeling better about ourselves, but Psalm 130 says that when all our sins are forgotten then we are able to serve God better.

Our lives are better without all the little and big wrongs that we commit, but let’s stay focussed on the reason why our lives should be sin-free. When we are washed clean by Christ then we are able to follow Him with all our lives.

Prayer: Lord, forgive us of the wrong that we do which separates us from You. Amen.

Spend some time identifying the things in your life that separate you from God.

I was teaching my kids from this very book recently; one thing that stood out to me, was that following God takes great courage. When she was called on to help save the Jews, using her position, it required more than just showing up, or signing a petition, it meant that she had to put her life on the line. We are required to invest ourselves, notr just a day or two a week, but our entire lives to what God has called us to do! This cannot be done lightly, but with thought, and thus courage.