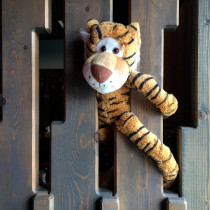 Some friends of mine from America recently visited Disneyland. They stayed in the Disney hotel and their children had an incredible time.

When they moved hotel to continue their holiday their youngest son left his toy tiger in the Disney hotel. He was having such a good time on holiday that he didn’t realise until they were getting on the plane to head back home.

His parents tried to console him but he was so upset that he had left his tiger behind.

When they arrived home that night they found a parcel on their front doorstep. It was from Disney and when they opened it they found that Disney had sent the toy tiger back home.

Now, people leave things behind in hotels all the time. But Disney has such a good understanding of a child that they knew that this toy tiger would be special to a child. And so they went above and beyond to make sure this tiger found its way home safely.

That is great compassion: understanding how someone else feels and going out of your way to make their life better.

That is a great example of how Jesus lived. He understood how other people felt and went out of His way to bring them into a closer relationship with God.

If we are to be like Jesus then we can read what He did and try to replicate it in our context. It seems like Disney are doing it well. They may not do it with a Christian intention but we can learn a lot from their passion, dedication and attention to detail.

Lord, You have given us the greatest example of compassion. May we do this for others as a way of being Your hands and feet in our world. Amen.

How can you show greater understanding to those in your day today?