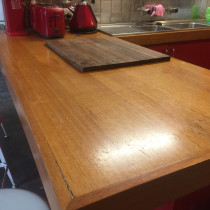 I love having a clean, clear bench in the kitchen. Some may say I’m quite neurotic about it. They would be correct!

My poor husband has to play hide ‘n seek for anything he may leave lying about on the bench because, before he knows it, I will have scooped it up and put it away. “Away” being somewhere off my bench!
My most constant battle with my foster daughter was that she would always leave things on the bench. She always said she was coming back to clean them up but I would have sold the house and moved into a retirement village before she cleaned up her mess without being asked! It was either a plate or cutlery or the frying pan or coffee mugs.
I tried everything – I nagged, I pleaded, I calmly beseeched, I yelled, I got my husband to speak to her. Nothing worked.
Someone told me to just throw anything she left out in the bin. The problem was – they all belonged to me! And I needed to use them when it came to cooking for the whole family.
So I decided that anything that was left uncleaned on the bench I would put in her room. I told her this was what would happen and she just shrugged and said OK.
The next time I came to the kitchen, sure enough, there were dirty things left on the bench and my daughter had already left the house for the day. So, I picked up the frypan, the coffee mug, the plate with knife and fork and calmly put them on her bedroom floor.
When my daughter arrived home she didn’t say anything but the next morning all the dirty crockery and cutlery was put away in the dishwasher and the fry pan was washed and put away. My kitchen bench was finally clear. I never had to ask her again.
It seems like a silly battle, but it was important to me. There’s nothing more frustrating than wanting to start a project but you have to spend 10 minutes cleaning up before you get started.
This can be the same with our mental health as well. If we have something unresolved then it’s very hard to move on. That argument or disagreement constantly comes up in our mind and we relive what was said or even what we would have liked to have said. Unless we resolve the issue or forgive the other person it is hard to move on.
Jesus was very clear about forgiving others. When asked how many times we should forgive He said not seven times but seventy times seven. He wasn’t giving an exact number but went on to explain how limitless God’s forgiveness is. And we should always strive to act in his likeness (Matthew 18).
Forgiveness can be really very difficult. That may have been part of the reason God went to great lengths to model it. Without being forgiven we can’t live with the freedom God offers us. And without forgiving others we trap ourselves in our own anger and hurt, making it extremely difficult to move on.
Lord, lead me to forgive my fellow brothers and sisters. Open my heart so I am not trapped in the darkness of the past. Amen.
What is holding you back from moving forward to the next stage of your life?